Wifidog and the dreaded memory leaks

I've recently made quite a few contributions to the wifidog project. It has been a lot of fun to see the project coming back to life after being almost dormant for the last couple of years. Now the bug tracker on Github is fuller than ever and the pull requests keep coming.

Some people reported memory leaks, particularly on busy access points (#34, #55). Debugging these problems. is a bit problematic. None of the developers have a suitable high-usage wifidog instance available. Additionally, typical tools like valgrind's memcheck or the GCC/Clang address sanitizer are not available on your typical OpenWRT device. Heck, my last device only had 4MB flash and I had to disable IPV6 support to fit everything.

The magic of virtual network interfaces

Wifidog internally uses the MAC and IP addresses to identify a client. To simulate clients which log in, log out or send random stuff, it is not enough to add another IP address on a virtual interface. Fortunately, there is macvlan, a special device type which provides a virtual layer2 interface.

Once I had created a good amount of virtual interfaces for the clients and an additional one for Wifidog, I only needed a mock authentication server and a client script which talks HTTP to Wifidog. For the auth server, I wrote a very simple python script which randomly answers AUTH_DENIED or AUTH_ALLOWED.

The client script first requests a random website, thus triggering the redirect code in Wifidog. The second request is a log-in request. With a 33% chance, a subsequent logout is triggered. The fun part here is provided by the multiprocessing package. The 40 or so virtual clients are distributed among three parallel processes. This ensures some randomness in request order and should also exercise the threading code in Wifidog.

There was one pitfall when implementing the client script. Although I do have virtual interfaces with (real) IP addresses, I needed to tell Python to use these as the source address for the HTTP requests. This is not exactly straightforward and some proposals include monkey-patching the socket code.. Python 2.7 however introduced a source parameter to HTTPConnection. It is not directly exposed in urllib2, so I decided to use the lower-level httplib.HTTPConnection interface (source):

One last problem arises even though I did everything right [tm]. If both the mock clients and Wifidog run on the same machine, the MAC addresses will not show up in the ARP table. To work around this, I added a way to pass a mock ARP table in the same format as /proc/net/arp to wifidog with the -a switch. Now it works on localhost and over the network.

Cool story, bro. Does it help?

Granted, the last issue was known beforehand, but the script provided a rather reliable way to trigger it.

Most importantly, we can monitor if we're still suffering from memory leaks. And indeed we do: 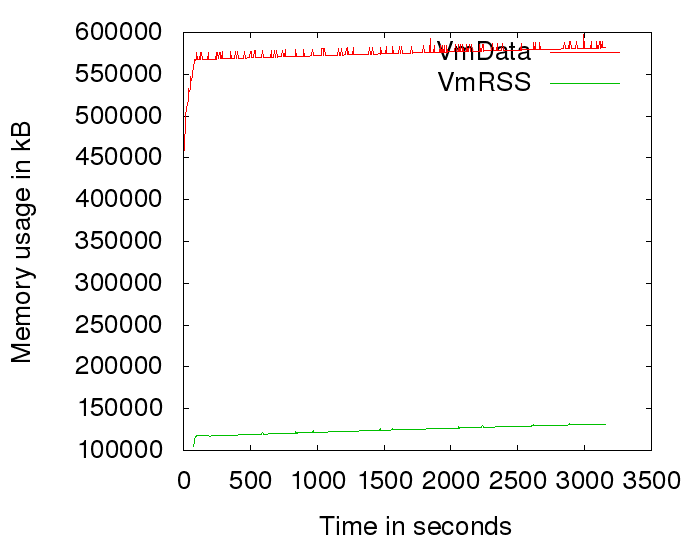 This is the current situation. These leaks are a bit harder to catch as valgrind shows no lost memory. There likely is memory allocated (and still referenced) without being free'd. Valgrind has a -show-reachable=yes switch which is useful in this scenario.

Beyond automatically hammering Wifidog with requests, we have tried some more fun toys. Wifidog now uses Travis CI to automatically build new code with both Clang and GCC with -Werror -Wall -Wextra which should make the code base a bit more resilient. We have already fixed all compiler warnings. Beyond compile-time checks, Coverity provides their static analyzer free of charge for open source projects. Integrated with Github and Travis-CI, it is extremely easy to find and fix defects (#165, (#163, (#160…). We have also tried the free clang-analyzer which, while helpful, did not catch as many defects as the non-free (as in speech) coverity scan.